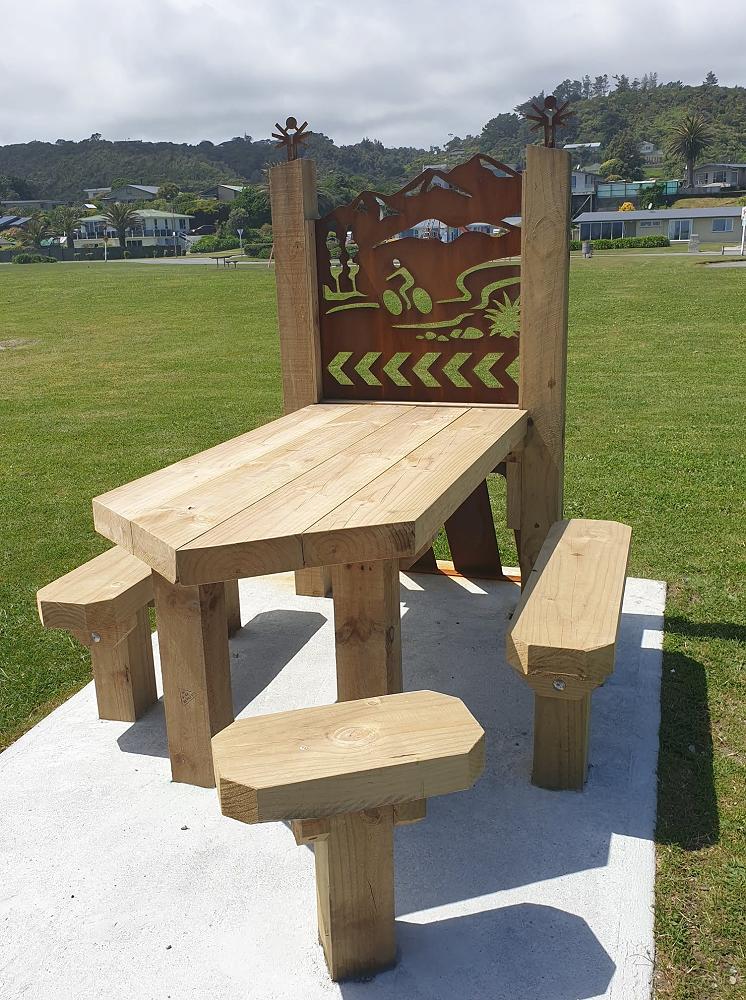 Has anyone noticed a new picnic table on the Wilderness Cycle trail next to the Karoro domain? Here is the story behind this community project

The Constable Jos Sturkenboom memorial table became a community project to recognise the efforts of Constable Jos after he lost his brief battle with cancer in 2019. Jos was a community minded man in both his public and personal life so it is fitting that many parts of the West Coast community worked together to ensure this project was completed.

Jos was the Chairperson of Special Olympics West Coast for many years and a subcommittee involving Jenny Green, Jenny Pizey and Leanne Mc Donnell started planning a fitting tribute.

The plan was to have a place where people could go to enjoy the scenery and enjoy some family time. A rustic, West Coast type theme with a Corten design that depicted Jos’s interests was the initial intention.

Martin Greaney at Fit FX gym were the first group to support the project by running an amazing 24 hr fundraiser on Ski Erg machines, 50 amazing people from the local gym participated. It was a fantastic way to motivate the community and was ably organised by Martin and Luke Sturkenboom, Jos’ son.

Special Olympics approached local Hokitika artist Sue Asplin to draw an artist’s impression of the ideas discussed for the Corten design. There were specific picture representations that were key to the design and they symbolised Jos’s involvement in the Police, Special Olympics, SAR, and the local Wilderness cycle trail.

Local engineering company Dispatch and Garlick were instrumental in cutting out the Corten, which also incorporated a place to park bicycles while people sat at the table.

Building of the table was a community effort as well, with many Police staff and Pete Green from Special Olympics putting it together.

Jos’s Police journey is symbolised by the band of shoulder stripes at the bottom of the design.

Jos was involved with SAR, Search and Rescue West Coast for 30 years, so mountains, trees and water represented these features.

A cyclist was added as Jos was a key member of the team that initiated the West Coast Wilderness Cycle Trail that now runs from Greymouth to Ross. Jos continued to be involved in the cycleway, he regularly planted flax and plants along the trail, picked up rubbish and generally was an unofficial caretaker.

Constable Jos was an Education Officer for all West Coast schools and many children, past and present, remember Jos teaching them to ride a bike.

The Special Olympics logo was the finishing touch. Special Olympics was close to Jos’s heart as his younger son, Alex, was involved. Jos was the driving force behind the re-establishment of the Special Olympics group on the West Coast. He dedicated endless hours, attended many meetings and patiently but with great enthusiasm ensured all special needs athletes were included in the local community. He accepted everyone with warmth and understanding and gently challenged them to be the best they could be. The club will always strive to uphold these values in honour of his memory.

The location of the seat was carefully chosen, it is placed on the edge of the cycle trail, next to the sea at Karoro Domain and it can be seen from the Sturkenboom family home. It is wheelchair and bike friendly with spaces for both included in the final design.

It is a fitting tribute from a West Coast community to remember an extra special Community Constable. 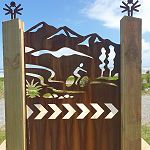 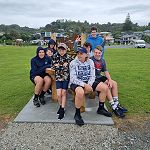