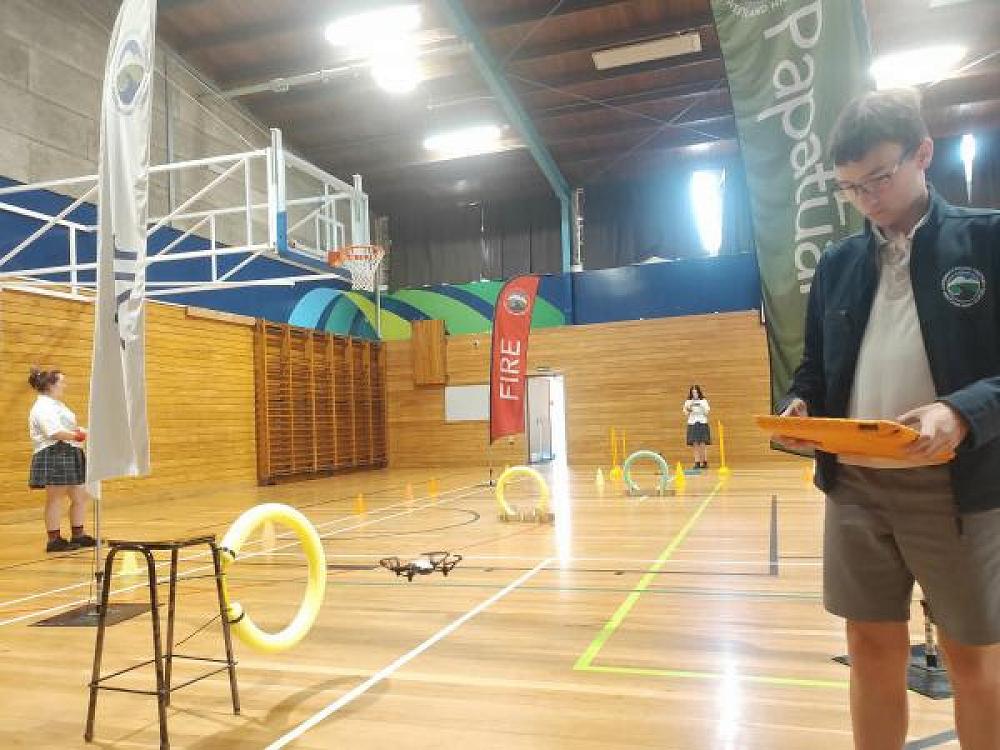 Westland High recently were mentioned in the She Maps Drone Tournament Competition magazine, after we held a drone tournament at the end of last year. Attached is the article sent in.

This was our first Drones Tournament ever and we were excited to make our own local maps of Hokitika, the West Coast and the Southern Alps of New Zealand by printing them over multiple A4 coloured sheets and stitching them together.

We encouraged WHS students to represent their four Hapu (school house teams - four coloured elements of Air [Hau – in white], Earth [Papatūānuku – in green], Fire [Ahi - in red] and Water [Wai -in blue].) to try their best over four events: driving a Sphero bot through a lego maze and three flying events.

Students enjoyed the timed obstacle course with Hapu flags, getting bonus points for flying through pool noodle hoops. We didn't have the mirror film, so instead we flew a precision LEGO "search and rescue" landing and lastly, a "Drop in the Ocean" 3D printed egg cup to deliver 'first aid - air drops' of ten tiddlywinks. Interestingly, some teams tried to get the best times by dropping a cupful, rather than one at a time.

We also welcomed visiting students from our primary schools, St Mary's Hokitika and Ross School, who all had a blast.

We had a few wifi interference issues and a couple of drones misbehaved. We had a couple of crashes and broken 3D egg cups when low flying flips went wrong. Luckily, I'd 3D printed plenty of spare ones.

The students supplied plenty of energy and enthusiasm whilst I rapidly charged as many batteries as quickly as possible.

I totally recommend the Combo Boost pack, but next year I think we'd like to do coding of the Tello Edu drones in a swarm, perhaps as a performance piece. Hopefully, the mirrored film will be available from Amazon and after I've 3D printed the mirror holders, we can try the coded missions in Python with Year 11 NCEA students.