A challenging game fought hard for the win 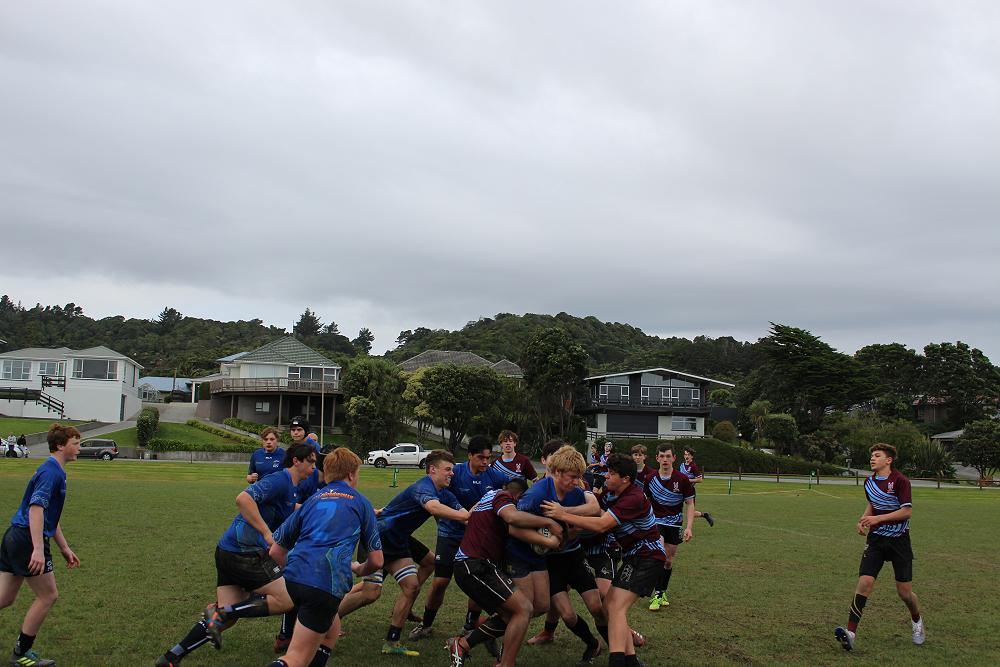 On Wednesday the 2nd of June, the 1st XV played against John Paul II.

John Paul II looked to sustain their undefeated record against Westland High since we helped to develop enough players for their own team in 2020.

The morning started with huge numbers of volunteer parents to convoy the boys up to Greymouth for the game. Nervous but focused boys got into the cars at 9:30 all looking smart in their number 1’s. We arrived after some bad singing in the cars to Marist grounds in plenty of time before kick off.

The boys warmed up with focus and a calm sense of purpose. Being hugely generous of their time especially with the amount of boys we had playing out of position lots of manaaki was shown to make sure everyone felt confident in their new rolls.

JPII got the early points and struck close to the ruck, they found a space to put the first five points on the board. From the side line you could hear boys correcting that mistake “Ruck D Boys” they had identified the problem and fixed it live on the field. However, still not the ideal start as we were less than 3 min into the game.

The kick off was well chased and a competitive ruck formed, where we looked to turn over the ball but in the back line away from any action one of the JPII boys fell to the ground and had a seizure. The game stopped. Karren our medic and Becky our super star mum and supporter bounded onto the field to look after the boy. A break for the ambulance ensued with AJ looking after the WHS boys keeping them warm as the coach was with the medical team and the JPII boy. Daniel left the field to a spontaneous, loud and respectful applause from the WHS boys and JPII alike. Our thoughts and prayers are with him. (Update: he is well and as a result of the excellent work of the GDH they discovered some internal bleeding which is being addressed and they think the cause of his other recent seizures).

The game reconvened with both teams lifting their intensity. However JPII played to their strengths and found their wingers enough space to cross the line twice more before the half was up. With forwards on our wings it was the best game plan and well executed. However it was not the last points of the first half with our VC playing on the wing (instead of the second row) dotting down for the first WHS try of the day. Jesse Jones taking a beautifully timed kick from Tylar Bishop to put him over the line after beating a final defender to break the donut for us.

17- 5 at the half and some changes had to be made. Everyone gets half a game but with so many of the boys playing so well it was an impossible task. Huge credit to Conner Greig for his selfless act of support where he offered his position to give a full game to our most senior player Jacob Rochford. Jacob started the second half in his preferred position as the halfback and had the best half of rugby I've ever seen him play. More on that later.

Man of the match Mitchell Fitzpatrick refusing to be tackled as he drives forward.

Talismanic performances from the man of the match Mitchell Fitzpatrick whose carries were strong and secure the whole game. Layk Scowen had a normal day of being an absolute standout seemingly omnipresent on defense and carrying hard breaking the line in attack. The Captain Sean lead with his shoulder the whole game and seemed to find turnovers where no one else would have thought it possible, also managed to bring two defenders with him to cross the line for our second try of the game.

Captain Sean scoring in the second half.

Carlos and Jesse made for a great pairing in the back line supported by the heroic Austin Linklater (Donny) playing as far from the front row as possible on the wing. Donny later remarked he could have paid the game in his number 1’s but the ferocious tackling and ruck support he offered on the wing saved us from 3 sure line breaks and at least one run away. Nate Croy was a hero to organise the back three made up of only one actual back (himself) and 2 forwards.

The game was played in great spirits with big impacts and both teams refusing to take a backwards step. Unless we include the scrum in that, where our abundance of first class forwards, Daniel Williams, Titan Nuku, Jonathan Bradley had the JII scrum going backwards every time. Credit to their halfback who magicked the ball out of a backwards marching scrum time after time if not for him we could have won back possession on every single scrum.

Despite all the pressure some anxious handling by us and expert kicking from JPII had us working hard to move up the field. With 10 min to spare we turned our pressure into points with our Captain dotting down to bring the score to 17 - 12.

JPII knew what to do; they kicked it deep. Rightly they knew we could not risk kicking it to their back three. So we had to roll up our sleeves and punch our way out of our own 22 towards their try line with moments to go on the clock. We strung 26 phases in a row and made 75 meters. During this attack JPII cleverly targeted our wider channel players hoping to turn us over away from our forwards but Donny, Jesse, and Jamie all held strong. Special mention to Jacob Rochford who secured a ruck against 4 genuine jackal threats most players would have folded under the immense pressure but not Rochy, not that day, he was on fire!

Next followed a confusing moment as, we formed a maul and drove over their line to (according to at least one of my eyes) score under the sticks but the referee had concerns and ruled it as a 22 drop out. They kicked the ball to us deep but Carlos, and Tylar Bishop linked and cut their way down field to unselfishly put Jesse Jones into the corner for 5 points.

Time was up. The scores were tied.

Bish, in front of a now silenced home crowed, who just one minute earlier were celebrating a win, placed the ball so close to the chalk outline that we had to move the spectators to give him space.

In the deafening silence of anticipation the referee’s whispered words echoed across the grounds “Full time. This is it.” The weight of those words seemed crushing.

Bish took a breath, took a step, then another and his foot struck the ball with such confidence that his smile betrayed the result far before the cheers of elation from his teammates. As the blue shirts temporarily lost their minds to jubilation and bouncing group hugs it struck me how much this team truly deserved this win.

Boys jubilant after Tylar Bishop slotted the kick to win the game.

None of this happens without the amazing team who help week in and week out, a huge thank you to Karen Burrows without her medical expertees the games literally could not happen. Rob Maitland for his organisation of the competition across both coasts and refereeing skills. All the amazing parents who give up their time to drive and get the kids to training. Angela Williams the teams first choice manager, whose amazing organisation has led to a truly seamless year of everyone knowing everything in time. Thank you, thank you to everyone who make memories like this possible. 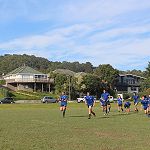 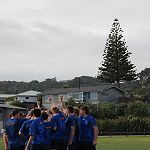 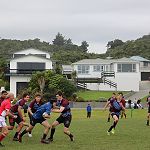